General Potter (ジェネラル・ポッター Jieneraru Pottā) is the head of Parappatown's military forces, as well as Sunny Funny's father. He has a small appearance in PaRappa the Rapper where he allows Sunny to go on a date with Parappa.

In PaRappa 2, he works with Papa Parappa to figure out a solution for the noodle dilemma, though is none too happy to be shrunken. Potter later recruits Parappa and PJ into the army, and then using the noodle's opposing element, sweets, leads an attack against the Noodle empire.

Papa Parappa points out Potter's main concern with the Noodle problem is that he loves sweets and wants to protect them. Although cutting Papa short in an attempt to deny it, it develops through the games that Papa was right about it. Potter refers to only variations of sweets in his speech to motivate his troops to fight against this epidemic. As a plan B during the war, he instructed the "Sweets Attack" which is using cake as ammunition. Potter gets really into it, proclaiming to let sweet take over the world, rendering him to the same food enthusiasm as the main villain.

General Potter is a creature with a potted-plant head who always wears his military uniform. 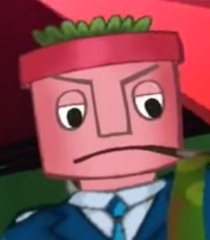 His face is a plant pot, which is the base of his body where roots grow out to form his body. His roots body ends up in hands and feet. 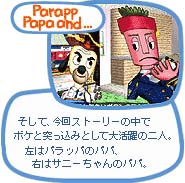