As Parappa and his friends ponders what to do today, Parappa suggests to go to the beach, but they figure they need a car (and a license) to do so. By coincidence, Joe Chin pulls over to show the guys his new car (whom are stoked) but only offers the girls a ride. Only agreeing to go with him if they all go, Joe Chin tells the guys to sit in the back, which is an unfortunate spot behind the outlet and unsafe for Joe Chin's driving behavior. To be like Joe Chin, Parappa yearns to get his own license, and immediately takes action as it cuts to Instructor Mooselini warning Parappa it's harder than you think it is.

Her stage introduces immediate reaction, but her lesson is simply showing Parappa to turn a direction, hitting the brakes and the gas.
As a boss in "Stage 5: All Master's Rap", she reveals to have been instructing the whole time and has been sitting in her car for days. With all other teachers, she dances on stage at "Stage 6: Parappa's Live Rap With MC King Kong Mushi".

In PaRappa The Rapper 2, she is mentioned and quoted by her sister Instructor Moosesha who tells their entire family is made of instructors.

She makes a cameo in PlayStation All-Stars Battle Royale in the Dojo stage, as an icon and a downloadable 'minion'.

While seemingly serious about her work, she sometimes forgets to close the car door and gets her antlers stuck on the roof. 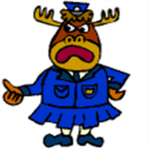 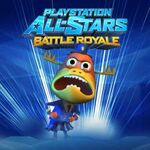 Mooselini cameo As a DMV Employee in a comic from The Amazing World of Gumball.