PJ Berri (PJ ベリー PJ Berī) is a teddy bear and Parappa's best friend. He is known for his dopey demeanor and big appetite, usually thinking of food at the most inappropriate times. PJ also works as the disk jockey on Club Fun under his signature name "PJ DJ."

PJ is shown to be friends with Parappa, Katy, and Sunny. He serves to mainly give visual humor during cutscenes. When the bullies and Joe Chin appears for the first time, PJ takes more interest in his meal. He later leaves with Katy and Sunny.

As Joe Chin shows off his car to Katy and Sunny, PJ suggests that Parappa get a license. This eventually results in Parappa doing so and crashing his dad's car. In both instances, PJ sat in the back of both cars.

For Sunny's birthday party, PJ decided to be in charge of getting Sunny's present. What it was is never directly revealed. During the party itself, Katy drags PJ away so Sunny and Parappa could be alone.

In Um Jammer Lammy, PJ Berri fulfills the role of gag character along with Parappa, whereas PJ is the goofball and Parappa the straight man. His addition to MilkCan mostly involves him thinking of food and designing the stage. When Parappa comes up with the idea to start a band themselves (Chapter 4: On Thursday), they both appear as rocker wannabe's, which Prince Fleaswallow responds to by given them both a Güiro (for children). Parappa is not entirely sure about the sound the instrument produces, but PJ Berri assures him that it's just Parappa's lack of skill. Parappa eventually manages to buy a guitar but as they want to be edgy for the sake of Rock'N Roll, they try to make it look used. PJ takes it to an extreme and cuts the whole thing up, eventually turning it into a Güiro again. "Now THAT's a guitar" During Stage 7, PJ can be seen DJing for Parappa and Milkcan.

He makes a cameo in the Stage 6 cutscene (EU and JP versions only). He is passing by while eating a banana onto which Lammy slips on his banana peel and dies, thus PJ being indirectly responsible for her death. He was shown again in the Stage 7 cutscene, in the same spot he was walking and when Lammy returns to her body, not noticing of what he had caused as time had supposedly not having past for them.

In a screenshot for the game[1], Parappa and Pj are shown with boxes and a clown teacher. This implies that Parappa's story mode was to originally have his own songs rather than remixes of Lammy's, with PJ occasionally being involved. The full context of the screenshot has never been revealed, though.

PJ is portrayed as being best friends with Parappa and can be seen dancing in the background of multiple songs alongside others. He is one of the many friends who was featured in Parappa's nightmare and is shown eating noodles with Sunny and Parappa. As Parappa and PJ walk around town, PJ comments that Sunny probably hates Parappa for not enjoying her cooking. He shortly corrects himself to cheer up his friend. They then head to Beard Burger.

The duo order a traditional Beard Burger, with PJ ordering ten. They are instead giving multiple noodle burgers by Colonel Noodle. While Parappa is upset about finding more noodles to eat, PJ nods occasionally to agree with Parappa.

Later, PJ and Parappa attempt to eat ice cream. The food promptly becomes noodles. PJ then comments that he can't eat ice cream in a noodle-ized state. He is still shown to eat his "ice cream" however, as he asks about Parappa's dad. The duo then head for Parappa's house.

During Chop Chop Master Onion's 'Romantic Karate' show, PJ is Parappa's dance partner. As one would presume, he follows along with Parappa's dancing in both single and vs mode. Although the show is targeted towards romantic pairs, PJ still agrees to hold hands and hug Parappa. He doesn't seem to like kissing, depending on his face. When rapping about roses, PJ gives out a steak dish instead.

As the duo hang out at the rapper's house, they eventually shrink thanks to Parappa's dad's latest invention. After this, his role is left to being a background character for most of the game, rarely commentating during cutscenes.

During the rap battle with Colonel Noodle, PJ suddenly appears. He proceeds to DJ for Parappa as he and Noodle continue the battle. After Parappa wins, PJ can be seen also DJing during Stage 8.

PJ Berri appears as a recurring character and Parappa's best friend in the anime.

In the anime, PJ is an aloof character with a face stuck in one expression and seems indifferent about situations if he even cares at all. His primary function as a character is to provide background gags, tied to his habit of sleeping during the day. His daytime napping is explained by his activity during the night; being the DJ to the party place the rest of the main characters occasionally hang out at. Despite his stoic behavior, he is involved within the group and remains aware of his surroundings during rest.

He loves his work as a DJ, as is evident that he also performs in his dreams, but he wants to reach people and contributes to an ultimate goal of world peace.RodneyFun Comic Collection

PJ is a brown teddybear with a constant sleepy/disinterested look on his face. His torso comes with a round belly button and stitches on his chest. PJ himself is uncertain if he's naked or wearing a suit. 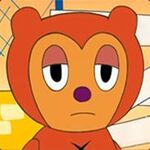 PJ as seen in the anime.

PJ as he appears in PaRappa the Rapper 2