Rapper & the new M.C at the Club Fun in move

PaRappa Rappa (パラッパラッパー), alias PaRappa the Rapper (or simply PaRappa), is a paper-thin rapping dog and the titular protagonist of the franchise. His adventures usually lead to difficult situations which he counters with his catchphrase, "I gotta believe!" and pulls through.

Parappa stars as the main character in his quest to reach his idea of adulthood to proof himself towards his crush Sunny Funny.

PaRappa is the secondary protagonist in Um Jammer Lammy. After completing the main story, an additional story arc is unlocked, starring PaRappa The Rapper himself as the player's character. In cutscenes, he is depicted as being enlisted into MilkCan as a helper for everyone else (Lammy, Katy, Ma-san and Sunny), and later teaming up with his friend PJ in an attempt to start their own rock band.

Like the first PaRappa game, PaRappa appears as the main character and is the only playable character in PaRappa The Rapper 2. In the game's battle mode, however, player 2 will play as the instructor of the stage currently being played.

In this slice of life anime with a lesser degree of absurdity, PaRappa spends time with his friends at school.

PaRappa appears as a playable character in the fighting game PlayStation All-Stars Battle Royale for PlayStation 3 and PlayStation Vita. In PaRappa's story, he is walking down the street and sees his friends, who tell him they're reading a new comic starring Joe Chin, who is portrayed as a hero. He notices his friends adoring Joe, so he decides to become a hero as well. His moves include the training from Chop Chop Master Onion, as well as the aid of his boombox and skateboard. His in-game "rival" is Spike from the Ape Escape series. Parappa returns to see his friends, telling him that Joe Chin disappeared, saying he wasn't invited to a contest that he was hopeful to appear at. Parappa begins to wonder and asks them to come to the dance club, eager to show off his new style.

"PaRappa" is a play on Japanese words meaning "paper thin", referring to the game's artstyle. In media outside of the games PaRappa has given more a more 3D appearance as the artstyle is hard to work with in dynamic artwork.

Parappa is a beige dog with black ears and brown eyes. His iconic orange beanie that covers his head has a symbol of a frog on it. He wears a sleeveless blue shirt, big navy blue jeans and red and white sneakers.

A running gag involves the top of PaRappa head which he covers with his beanie.

Hairdresser Octopus: Hey! Take that stupid hat off! What does it look like in there!?
PaRappa: I-I'm not sure myself...

In the final episode of the anime series, the others saw what was at the top of his head when the birds took it off and were freaked out by the appearance. It was covered right until the birds gave him back his hat. In the Bad and Awful mode of Stage 6: Taste Of Teriyaki from Um Jammer Lammy, the frog on PaRappa's hat skeleton shown briefly.

PaRappa as he appears in PlayStation All-Stars Battle Royale.

PaRappa as he appears in PaRappa the Rapper.

PaRappa as he appears in PaRappa the Rapper 2.

Character sheet for the anime.

Parappa's model in Parappa the Rapper 2. 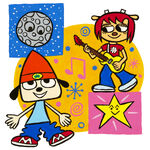 Retrieved from "https://parappatherapper.fandom.com/wiki/PaRappa_Rappa?oldid=20894"
Community content is available under CC-BY-SA unless otherwise noted.