Prince Fleaswallow is a jamaican frog who runs a local flea market and believes in three things: Music, love and Money. When PaRappa needs money to fix his Dad's car, he becomes his tutor and shows PaRappa the secrets of the trade in order to help him raise enough money. He hates being called a lizard.

Fleaswallow manages to build himself up and now runs a music store, which appears briefly in Um Jammer Lammy, though he doesn't have a speaking role. He also appears in PlayStation All-Stars Battle Royale briefly during the Dojo stage inside of his flea market. 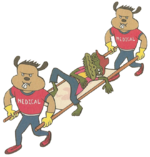 He does not appear in PaRappa The Rapper 2, but does appear in its Guide Book artwork of Stage 4: Sista Moosesha. Fleaswallow took Instructor Moosesha training to "turn into a real man!!!", most likely volunteering to aid in the war against the Noodle Syndicate, just like the Bullies did. But intentions only did so much for him as Fleaswallow got pretty messed up from the training and had to be carried away, having failed and most likely also be too injured to still serve the Parappa Town army.


In RodneyFun Comic Collection, Fleaswallow is shown fishing in Sunny's book and is pretty bummed out the fish won't bite, muttering to himself they never do anyway. Sunny advices him to be more polite, which he interprets as a cute joke until he witnesses it actually works for Sunny. It doesn't go too well for him once he follows the example as he is attacked by a Kraken, from which he manages to escape, but his boat disappears into the waters below.

In the anime, he is revealed having affinity for surfing. He awaits and longs for something he refers to as "Catherine" -which the Parappa gang expects to be a person and goes on looking for them- but it turns out to be a name Fleaswallow granted to a type of really high wave. He spends most of his episode awaiting this wave and seems sort of gloomy which the Parappa gang misinterprets as heartbreak and/or love sickness.

Easy-going and a bit shady. He is very relaxed, even when revealing to Parappa he has a hard time selling anything at all and that he is "on the run" over making money out of -most likely- something illegal.

He can get bored or bummed out. He is shown to smoke.

His accent is Jamaican.