With the help of Namco, Sony of Japan released an arcade version of UmJammer Lammy which had updated graphics and new songs in addition to the original songs.

Rock your way to the top of the pops with UM JAMMER LAMMY. From the mind of Rodney Greenblatt the brilliant designer of PARAPPA THE RAPPA comes this cartoon-inspired musical competition starring Lammy, the stylish and clever lamb guitarist for the band Milkcan. 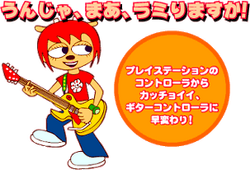 The arcade has a pretty grotesque playful design, having clashing bright colours and artwork all over its frame. As shown in the concept are, the header said "Joe Chin presents SUPER GUITAR'N' TABLE GAME!!", but GAME was changed for SYSTEM. The left side has Lammy's Poof symbol and the right side has Rammy's Skull symbol.

Although files of Parappa's version of Stage 1: I Am A Master And You! were found within UmJammer Lammy, the stage was not playable. It was included in the arcade.

Um Jammer Lammy arcade-bound, 09.04.99[5] Namco announces an arcade game based on the PlayStation rhythm game. After the original PaRappa the Rapper spawned the rhythm genre, countless arcade music games appeared to cash in on the craze -- and now the PaRappa series itself is entering the arcades. Namco recently announced that an arcade version of Um Jammer Lammy will be unveiled at the JAMMA show on September 11 and 12th.

Running off the System 12 board, the arcade edition of Um Jammer Lammy is virtually identical to the versus mode of the home version, except for one major change. The arcade game is played with the guitar-like controller from Namco's Guitar Jam, meaning PaRappa will likely not be playable.

If Um Jammer Lammy is successful, Namco plans to port additional home titles to the arcade as well, an unusual reversal of the traditional arcade-to-console ports.

Retrieved from "https://parappatherapper.fandom.com/wiki/UmJammer_Lammy_NOW!?oldid=19571"
Community content is available under CC-BY-SA unless otherwise noted.